On the success of the games, Syaza says: “It was quite a feat considering that the committee was made up of mostly part-time students who are working full time. There were a lot of challenges in planning this event especially for me as I am a primary school teacher and I had to learn to divide my time well.”

Hafiz works in the day and studies Economics and Finance in the evening because he believes a knowledge of these subjects will help him advance in his career. “Sooner or later, everyone will have to have a degree,” says Hafiz.

“Three times a week I will rush to class at 7pm. And when I finally reach home, it would be around 11pm as I live in the east, a long way from the SIM campus in Clementi in the west.”

Hafiz completes his studies at end-2014, at the same time as his wife, Syaza, herself a teacher in East Spring Primary School in Tampines. She holds a Diploma in Education from NIE and an Advanced Diploma in Primary Music Education.

Hafiz’s word of advice to young people who have stepped out of school and are not sure if they should go on to tertiary education or go to work: “Continue studying and don’t lose the momentum because if you waited too long after secondary school, you might not be able to pick up the pace later.”

Hafiz was the Best Male Athlete in the Inaugural Silat University Games 2014 organised by SIM GE. At the prize presentation on January 5, 2014, at Yishun Sports Hall, Mr Masagos praises the participants and says practising Silat instils sportsmanship, resilience and respect for others.

Hafiz, 25, who has done his SIM-RMIT Bachelor of Business (Economics and Finance), has been practising the sport for 16 years. He was a Gold Medallist in the Silat World Championship 2007.

“I’m grateful for the support given by my family, coaches and team mates,” says Hafiz. “The faith that they put in me drove me to perform to my best.”

He has not been competing for a few years due to injury and he was not confident of getting this far, he reveals. Hence, winning the Best Male Athlete was a bonus for him. His opponent for the final match was Khairul Faizal from NTU. 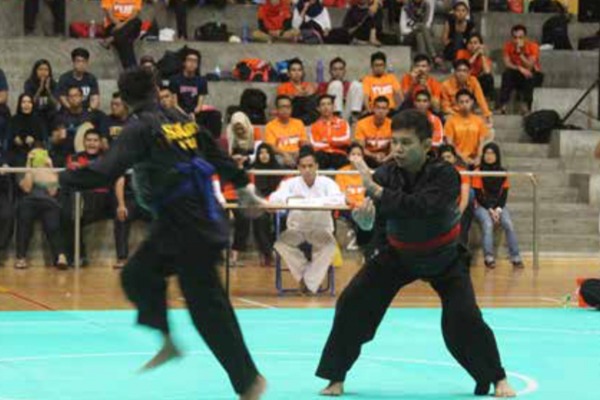